New project alert: what has open data done for you lately?

Five years ago, I blogged about my Open Data Study, an interview-based report commissioned by the Transparency and Accountability Initiative to investigate what drove the rapid adoption of open data policies in the UK and US.

I’m now embarking on a new project, commissioned by Omidyar Network, to examine the impact open data has had to date.

Those close to me know I’ve been trying to avoid working for big non-profits in order to get back to more personal writing projects. But when Omidyar Network’s Laura Bacon approached me earlier this year about working with her on this, I found it hard to resist jumping back in.

The reason is that this new study will attempt to answer a question left hanging in my report of 2010. Does it matter that open data was sold to governments on a prospectus of potential and not proven impact? Five years ago, I wrote:

It was the utility of applications (in contrast to the resources expended to produce them) and not their broad user bases, which seem to have inspired officials further up the line to engage with the open data agenda.

Five years on, I’m hoping to investigate not just how many people are using applications and services built upon open government data, but what impact this is having on their lives and the lives of those around them, be that social, economic, political or environmental. I’m going to do this through a series of case studies, and I’m hoping to find stories of open data impact at scale from around the world, and from sectors as diverse as health, journalism, transport and policing.

I’m by no means alone in my search for stories about the impact of open data. Projects with similar aims are afoot at the Open Data Institute, Open Knowledge, Sunlight, NYU’s GovLab and probably a bunch of other places I don’t know about too. And the initial stages of my work have been guided by a bunch of clever folk who’ve been thinking about how to measure the impact of open data for a long while, including the Open Data Barometer’s Tim Davies (thanks, Tim!) and Rebecca Rumbul at mySociety (whose sold-out conference on the impact of civic tech, TICTeC 2015, I attended last week).

So, if you’re interested in open data impact, or if you have a story to share, please do get in touch. 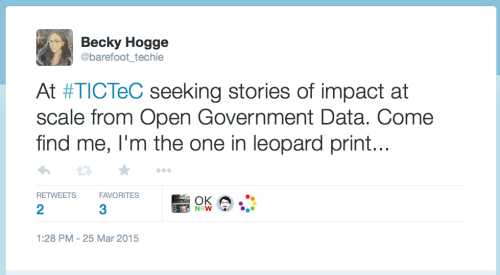 This entry was posted in Open Data. Bookmark the permalink.

2 responses to “New project alert: what has open data done for you lately?”