The Net Office – new spot in the NS

It’s called “The Net Office” and it’s an attempt to skim the surface of social media looking for stories that move the web, but don’t necessarily make it onto the mainstream news agenda. Working a week ahead of publication, in an age where more and more journalists do most of their reporting from their desks, will make this a tough proposition. But the fact that most mainstream media outlets continue to work within quite a narrow news cycle driven mainly by Westminster gossip, wire stories and forward planning calendars should make it a little easier. Easier still if readers feel kind enough to submit potential Net Report items “for:becky_hogge” on del.icio.us.

First up is a story about how difficult it is to find genuine public outrage at the sight of Ronnie Biggs on a mobility scooter:

It’s a scandal that has attracted coverage across the tabloids, accompanied by the sort of angry editorialising that the British middle classes seem to enjoy with their kippers and cornflakes. The Great Train Robber Ronnie Biggs, released from prison on compassionate grounds in August as his health continued to deteriorate, has been spotted using a mobility scooter to pop down the shops with his son in London. The world is outraged.

Except that the world doesn’t seem very outraged at all. The family of the train’s driver, Jack Mills, who died from injuries sustained in the robbery, has long campaigned against Biggs’s release, and is clearly angry at any evidence that he is enjoying life outside jail. And the leader of Aslef, the union for train drivers and operators, told the Mirror that the photo showed “Mr Biggs has confounded the medical profession as much as he has the British legal system”. This may be true, but it doesn’t compare with the worldwide anger and diplomatic damage that accompanied last month’s release of Abdelbaset Ali al-Megrahi.

The Biggs photo may be a gift to tabloid editors, but the scandal seems hardly to have touched the blogosphere or the Twitterverse. There are no Facebook groups protesting Biggs’s access to the streets of London, or YouTube mash-ups of him on his scooter.

Check on Twitter and all you’ll find is the Sun promoting its own story among two or three retweets; there’s not a single mention in the world of blogs. Even the febrile right-wing political bloggers, who usually seize on any evidence of Labour weakness, have nothing.

Comments Off on The Net Office – new spot in the NS

Posted in The Net Report

Posted on September 23, 2009 | Comments Off on Copysouth website relaunch

The team at Copysouth have relaunched their website today. Established in December 2004, this loosely-affiliated group of researchers seek to investigate the consequences of the global copyright system. Here’s a little bit more about their work on openDemocracy.

Their 2006 academic study into the negative effects on education and development of exporting Western copyright norms to the Global South is still a must-read.

I’m back from two weeks in Crete. Not much to say, beyond highlighting this advert, seen by my traveling partner on the train to Cambridge, the last strecth of a long journey home. 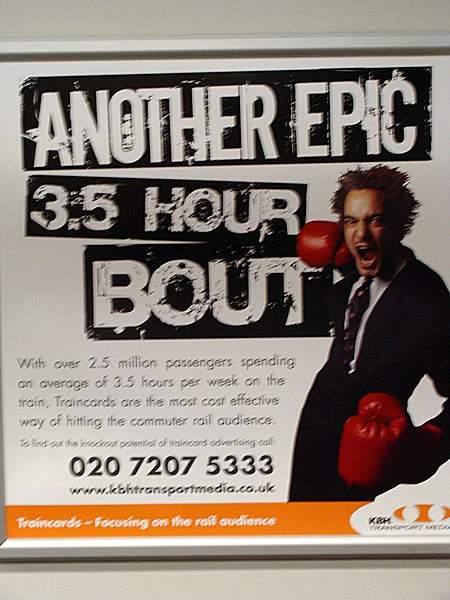 For the benefit of those who can’t read the blurry text accompanying this crazed image of a boxer in suit:

With over 2.5 million passengers spending an average of 3.5 hours per week on the train, Traincards are the most effective way of hitting the commuter rail audience.

I don’t think I’m unusally intolerant of advertising. But I have started to notice how intrusive traveling on the tube feels, in terms of the visual assault up the escalators, etc, now I’m just a visitor to London again. And on my flight back I can’t say I enjoyed staring at the text-heavy advertisement for Europcar that had been helpfully draped over every headrest for the benefit of the person sitting behind. After eight plus hours traveling through public space I did feel like I’d gone ten rounds. So thanks, KBH Transport Media et al. Now fuck off.

Comments Off on Back from hols